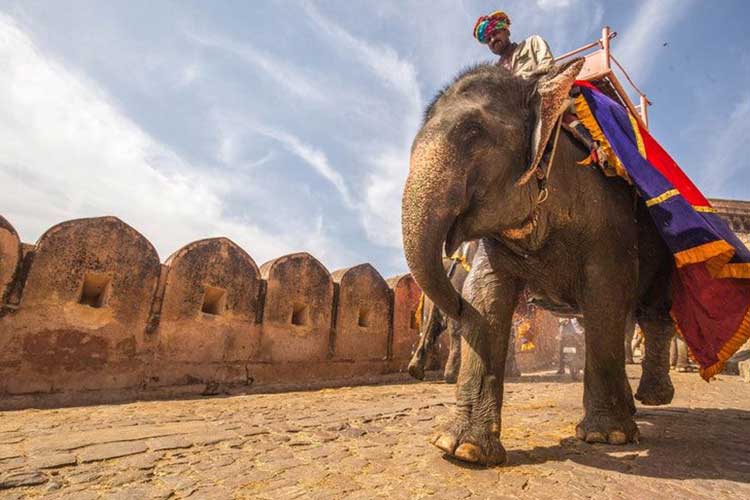 An elephant is the biggest land mammal or animal. It is very intelligent and is known for its sharp and keen memory. Elephant can have grey or black colour skin. They are considered as the descendents of an extinct species called as mamamoth.

Elephant has a huge body, four thick and big legs which help in maintaining stability and balance. It has got two large ears with an external pinna and audiotary meatus. But an elephant’s eye and tail are very short. It has got a very long trunk, in which nostrils are present (elephant breathes from these nostrils only), an elephant can fill water in its trunk.

The trunk of the elephant is also used by it to grab, eat food and it can also be used to break down the long tree branches, in short an elephant’s trunk works like a human hand. Beside the trunk, an elephant has been provided with enamel tusks. These tusks look like huge canine teeth, but they are not.

Elephants love swimming in streams and rivers. During the olden days the elephants were used in wars, they were basically ridden on for the huge and massive wars. This animal is very strong and at the same time is very intelligent.

Generally an elephant is a calm animal, which loves peace and harmony, but when it gets aggressive due to any irritating stimulation, it can be the most dangerous creature on earth. They are useful to humans even after death.

Elephants are herbivores and feed on the vegetation- that is long tree branches, fruits, bamboo, leaves etc. An elephant can be kept as a pet because of its calm nature, faithfulness. It is useful to humans in many ways by transporting or carrying heavy loads on their backs. It can be tamed easily.

Even a human can ride on an elephant’s back for long distances. As a pet, extreme care should be provided to this organism because of its extraordinary size. A wild elephant on the other hand is more dangerous than the pet one.

An elephant is also kept in the zoo, where the spectators or the visitors come to watch it. This animal is also a part of the circus group, where it performs many talented shows to entertain the audience, this tells us that elephant can be trained easily and  it can understand everything approximately.

The tusks of this animal is used for various purposes, like ornamental, cosmetic, desigining etc. The items which are made from the tusks of the elephant are extremely valuable and expensive.

But nowadays elephants are being exploited for their high priced market value. This should be stopped or else it will finish their existence.

Elephants should be respected by humans. In our country India elephants are worshipped in the form of lord Ganesha, which provides them with immense love, respect and care from the people of this country.

Elephants are a very important aspect of this ecosystem, they should be protected and taken care of and not be killed or hunted for selfish reasons.