Mahatma Gandhi is known as the Father of the Nation who led the independence of the country through the & Satyagraha movement, and the non-violence movement “Ahinsa”. He focused on civil rights all over the world.

Mahatma Gandhi was born in Gujarat state at Porbandar on October 2, 1869. Putlibai and Karamchand Gandhi were the parents of Mahatma Gandhi. The Father of the nation was married to Kasturba Makhanji when he was 13-14 years old. Gandhi had 4 sons.

For the sake of civil rights, in South Africa, Mahatma Gandhi started non-violent movement related to civil disobedience in the resident community of India.

In 1915, when he came back to India, he started gathering urban laborers, farmers, and peasants in protesting against
discrimination and superfluous land-tax imposed by the British government.

He accepted the Indian National Congress leadership in 1921. He then initiated nationwide campaigns for extending women’s rights, for improving poverty, for building ethnic and religious amity, for ending segregation, and for winning the Indian independence from the domination of British culture.

In 1922, he started the Non-cooperation movement. To fight against the salt tax imposed by the British government, he drove the 400 kilometer Dandi March in 1930. Then he forced white people to Quit India through Quit India Movement in 1942. He was locked up in jail on various occasions for numerous years, in both India and South Africa.

Gandhi was a practitioner of truth and non-violence, favored that every people should follow the laws and regulations. He wore Indian traditional outfit like Indian Shawl and dhoti designed with hand-spun thread made from Charkha.

Mahatma Gandhi was vegetarian and he believed to have fasted for a long time concerning self protest and self purification.

From another perspective, Mahatma Gandhi was a prolific writer as well. He edited many newspapers, for example, Harijan in English, Hindi, and Gujarati; Young Indian and Indian Opinion in South Africa in English, and Navajivan, in Gujarati on monthly basis. Gandhi also composed several books like My Experiment with Truth, An Autobiography, or his Autobiography.

Mahatma Gandhi and His Economic Ideals 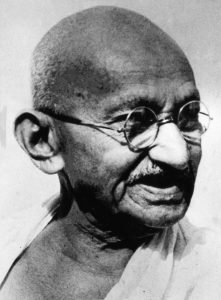 This results in exploitation, oppression, and discrimination. Gandhi also believed that there is plenty in this global world to clothe and feed all. Though, there is deprivation and poverty because higher authority people criticize lower-division people on the labor. Gandhi accepted that the high capitalist efforts were the root causes of all types of suffering.

Gandhi firmly believed in the hard work which belongs to ethics. According to Mahatma Gandhi, this was the right pathway to fight against poverty and to disband the world from the economic woes.

Mahatma Gandhi also believed that the lack of work and lethargy can lead to immense spiritual and physical deprivation. He held that the growths of new modes of industry and extensive productions that overpower the age-old domestic village methods give birth to laziness and unemployment.

So, he strived hard for the revival of the production modes of the village.

The most fascinating thing about the economic model was that Mahatma Gandhi wanted to turn the entire profit from the big industrialist’s pocket to the normal workers.

He also believed that the customer should be concerned with achieving high quality, economical products, but the consumer should take into account which part of the community or culture is profited by the investment. As compared to home-made khadi, foreign clothes work well as they may be cheaper and better.

However, the use of foreign clothes relentlessly would cause unemployment among villagers who’ve traditionally involved in weaving and spinning home-made fabric jobs.

The same is also applicable to agriculture products. Gandhi believed that by selecting such type of imported goods may cause degeneration in the village economy as it was the Indian economy’s backbone.

But side by side, Mahatma Gandhi was mindful of the implications of hostile capitalism. So, he comes up with a plan which works in every environment.

The law regarding man-power can utilize mechanization to improve its mechanical and agricultural production. Secondly, Gandhi believed that a nation should need to produce only the desired amount. Excessive production would cause exploitation.

For Mahatma Gandhi, the situation in India was eventually a demonstration of the hostile mechanization supported by the foreign British colonialists.

India’s Conditions as per Gandhi

Right after the successful initiative in South Africa, Gandhi returned to India to figure out the absolute disarray state of the Indian economy. Mahatma Gandhi was unhappy because of the break down in the rural economy by the foreign British authorities. By facing all these conditions, he ended up in the two-fold decision.

First, Gandhi had to introduce the moral courage in India to be practically self-sufficient, fulfilling and producing its own basic needs in home-grown domestic ways.

This way he succeeded to break the motives of the British economy and also helped to revive the Indian rural economy. Gandhi already knew that there was only a single way out and therefore, he instantly started work on it.

Mahatma Gandhi led every one of their resident of Sabarmati ashram to follow the same. Very soon, the ideals of self-sufficiency regarding economics were embraced throughout India. Later, British authorities realized that by targeting the economic interests, Mahatma Gandhi had easily and successfully confined their action behind their Indian rule. 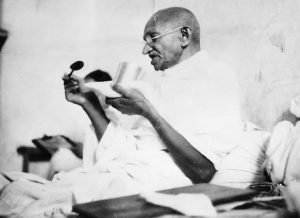 Mahatma Gandhi is known as the Father of India and he left us with a heritage that we all are enjoying with pre-Independence struggle. He also serves as a motivation for many people all over the country. His primary focus is on non-violence, simplicity, truth, and care for poor people.  He has left his enduring imprint on the issues related to the development of general well-being as well.

Peace and non-violence is the time when many countries all over the world are contributing their money to defense services and their nuclear depository. The situation is very critical. So, according to colonial rule, they have experienced outrageous exploitation. Additionally, their resources than have been turned into smithereens.

Nonetheless, they only stressed their liberation on the colonial core; they haven’t used their energies to get the things back on the right track. They were mainly concerned with keeping things intact and this result in hampering key areas such as health, education, and the economy of these countries.

Mahatma Gandhi is also a leader and he believed in the aphorism of non-violent and peaceful protests. These protests gave birth to popular movements such as Non-Cooperation and Satyagraha, where the crowd didn’t cringe on the face of the repressive British invasion.

Jawaharlal Nehru was the follower of Mahatma Gandhi also followed his path and dictum by starting the movement called Non-Alignment Movement which allowed India to govern the Cold War. After going through all this, there exist a need to focus on areas like economic development, education, health, and safety. There exists a need for the proper balance between them.

In Indian history, one can find several dark spots. Among them, the caste system is very critical. During the Early Vedic Age, the system was occupation-oriented and this system became so rigid that it couldn’t be changed under any condition or circumstances.

Shortly, based on caste affiliations, qualities were defined and according to this people were granted a privilege or they were being ostracized. In the colonial era, this fashion continued like social evils, for example, manual scavenging and it continues in the form of crime like honor killing.

Gandhi was the first leader amongst the many leaders who have initiated a voice against the discrimination of lower caste people. He named them god’s children or Harijan. He believed that these depressed and hapless people should be welcomed and accepted into the general society. As stated above, the caste system is a dread that seeps deep into the society.

Jobs, social interaction and marriages all depend on the caste system. Taking the caste system into account some steps regarding reservation have been taken to solve this issue.

Mahatma Gandhi always dreamed of India to be a vibrant nation concerning its economic base. However, after getting Independence, India has stepped into a different path o development. The revolution is started by first focusing on industrial development then mining and manufacturing industries in the 1990s. Then in the 2000s, the tech boom and information technology played the role to develop the nation and thereafter, it leads to the birth of the service sector. Therefore, now India is seen as the global economic power but the largest agriculture sector of India continues to deteriorate from the employment perspective.

Many economists believe that to progress, villages have to transform into big cities. But they don’t understand that everybody has their own life and if we talk about from an environmental point of view, forests and villages play a vital role as they are treated as the lungs of the global world.

Imagine a scenario, if we’ve to practice agriculture or move to villages! Or, just assume concrete jungles without animals and trees! Everything seems meaningless. We can’t even think of it! This is the reason why it’s essential to have the right balance between tradition and progress. Therefore, India, with its compelling agriculture setup and unrestrained natural resources, could have achieved the self-sufficiency which the majority of the nations can only think of. However, this is a materialistic step that never fades off in the future.

Boycott movement has global consequences. The majority of the people are unaware of the Indian lawyer. He changed the entire lifestyle which was less developed in South Africa. When Gandhi was driven-out from the train compartment of white people in Pietermaritzburg, he decided to face the fight against the racism which was prevalent in South Africa and therefore, initiated a movement based on non-violence and peace against racial discrimination.

It is something that Mahatma Gandhi would also implement easily in India. This movement gives motivation and inspiration to Nelson Mandela to start the battle against the Government of South Africa. Finally, this led to the independence of the country in 1991 from the awful regime with greater privileges and rights.

This principle also found good rapport in the United States against racial fight where Martin Luther fought for African people for equal rights till his death. No doubt, it has found significance worldwide but still, the world is facing the problem of racism and even people are these days being tortured on various points like religion, race, et cetera.

It isn’t the safest place for people to live. All in all, the world has to experience what Gandhi had experienced years back. Mahatma Gandhi always focused on the point that – that every person in this world is equal. The people should not be discriminated against on religion and caste basis.

It is believed that Mahatma Gandhi had given us the great men before we have shown us a clear path to rise against the caste system and racism and make lives better.

Though, we people, in our arrogance, glory, and pomp overlook the lessons learned in the past. Everybody knows what Mahatma Gandhi had taught us and are also are mindful of their benefits. However, we are unable to apply them fully in our daily lifestyle. Maybe, we don’t understand how much we are benefitted by Mahatma Gandhi.

⭐ How can I write about Mahatma Gandhi?